The Tracker provides reliable, time-based movements throughout the day and returns to its home position at the end of the day.

The Tracker uses a real-time clock which is far more reliable than other systems that use photo sensors and thermal expansion to orient to the sun.

The Solar Time Tracker can have a north-south tilt option added to move the panels up and down to maximize seasonal placement of the sun in the sky.

The Tracker comes with a powerful, high torque actuator that will provide years of trouble-free service.

The Tracker can be set up to accommodate the size and number of your panels and can be installed in series to simplify maximum power output to meet your needs.

The Tracker module is easy to set up with a bright LCD display showing position and time. It comes preprogrammed for your specific location based on your zip code.

The Solar Time Tracker is constructed in the USA of the highest quality components. It is designed to be used indoors in a dry environment. The 1-year warranty covers any defects or unlikely failures. 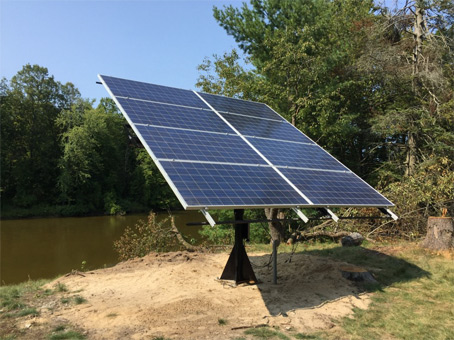 The real solution to maximize the output of your solar panels. This solar tracker smoothly positions your panels throughout the day to accurately capture the maximum exposure of the sun. As we all know, the more power you generate, the more money in your pocket. Out system provides reliable, time base movements throughout the day and returns to its home position at the end of the day. Far more reliable than those systems using photo sensors and thermal expansion, and less expensive! It comes with a powerful high torque actuation that will provide you with years of trouble free service.

The graph shows how much more effective collecting and storing solar power can be when utilizing the Solar Time Tracker configuration. 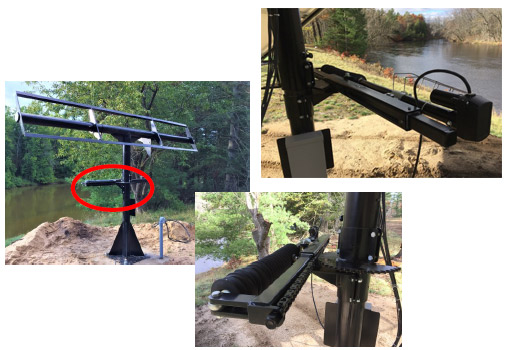 This 6-inch pole is secured to the foun-dation and the support brackets for the solar array have been attached. The heavy-duty actuator is circled in red. 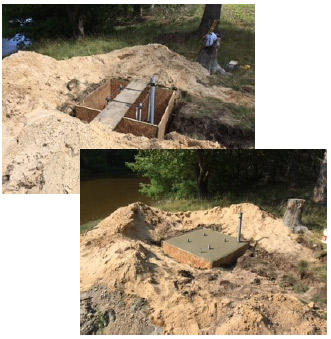 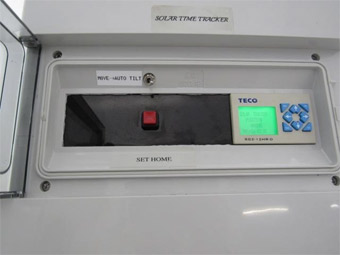 Solar Time Tracker control box is installed in an protected location to control the actuators on the pole. It is easy to set-up and operate with bright LCD display showing position and time. Rugged design provides years of trouble-free service. It’s use will maximize your panel’s output by 35-45%. Uses real time clock instead of unreliable sensors. 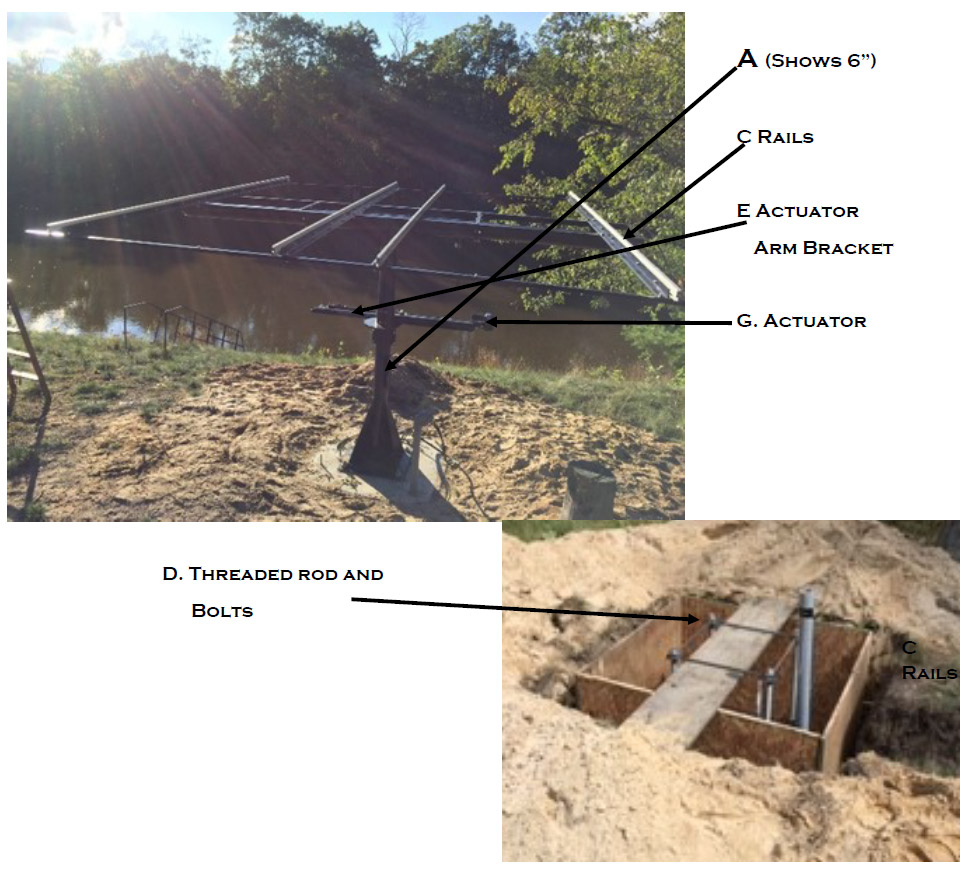 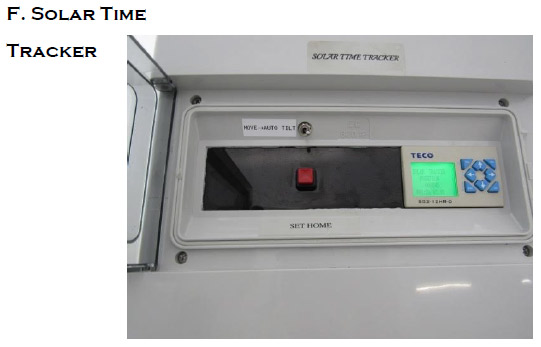 Thank you for looking at our product reviews. This is a new feature we have just started offering and hope that it will help you make a decision about our products. If you already own one of our greenhouses or another one of our products, we would appreciate a few minutes of your time and ask you to answer the following questions. We appreciate your time!

Can I add a north-south tilt option?

Yes. In order for the Solar Time Tracker to be able to move both east-west and north-south, an additional actuator is necessary.  Also, the single controller would have to be replaced with one of our controllers with this tilt option. The cost to add this option to a controller is about $950 and should be ordered at the time when placing the order for the entire system.

Can I also order solar panels from you?

The package pricing does not include any panels.  We do have the capability of supplying solar panels with your system.  We would need to know which size panel you would like to use.  We have 72 or 60 cell panels.

Can additional poles be added to increase the wattage?

Additional poles can be added and can be synchronized to work together.

For many homeowners in the United States, it makes complete financial sense to invest in a solar system. That’s because solar panels can save you a significant sum on your monthly energy bill.

The exact amount that you save will depend on several factors, such as how much sun you get, how much electricity you’re using now, and what type of panels you purchase.

But if you get sun for at least part of the day, you will be able to lower your energy bill by purchasing solar panels.

Although solar systems can cost upwards of $20,000, most homeowners break even on them within 8 years of their purchase thanks to the savings they receive on their energy bills.

Once your solar payback period is over, you will get to continue benefiting from a reduced energy bill until your panels stop working. That means you could enjoy more than 20 years of significant energy savings after you’ve already broken even on your investment.

Will having solar power increase the value of my home?

A solar power system is considered an upgrade to your home, much like a remodeled kitchen or a finished basement, so installing one will increase the overall value of your home. Solar homes tend to sell for more than non-solar houses.

Studies show that home-buyers tend to pay a premium when buying a solar-powered home. A particular study by Lawrence Berkeley National Laboratory estimates that a solar power system increases the overall value of a home by an average of $15,000.

A major benefit of solar is the ability it gives you to reduce your carbon footprint. The continual dump of pollutants and excessive amounts of CO2 into the air from traditional non-renewable energy sources is putting the planet in danger. The continued reliance on fossil fuels makes it more and more difficult for the environment to keep the air clean. Researchers have shown that a residential solar panel system can solve the entire energy needs of a home with about 80% lower carbon emissions than fossil fuels. That’s a massive reduction, empowering you to do your part to fight climate change.

Will having solar power make me energy independent?

Many people choose solar because they wish to live a more independent lifestyle. Solar panels enable this by giving people a way to satisfy their energy needs without having to remain connected to the utility grid. Just keep in mind, to achieve true energy independence, you will likely need to supplement a residential energy system with a solar battery or two.

What are some solar industry word definitions?

Key Solar Energy Terminologies
If you are new to solar energy, then there are several key terms that will be unfamiliar to you initially. This section will help you get up to speed faster by defining some of the most important of those terms for you.

Alternative Energy
Also commonly referred to as renewable energy, alternative energy describes energy derived from sources such as the sun, wind, tidal, and geothermal heat, which are naturally renewable and cause less-to-no harm to the environment.

Meter
A meter is what your utility company uses to monitor how much electricity you consume in a month. Meters are also part of solar systems. They tell you how much energy your system has generated over a specific period.

Net Metering
Net metering is an electricity billing practice, of which there are several different types. The main thing to know is that it’s the practice of giving you credit for the excess solar energy that you generate and send back into the electrical grid.